The Kannajil Workshops in Hazelmere were a gentle introduction to the Noongar language, led by Kobi Morrison. The introduction to the workshops was by way of a Welcome to Country by Ted Wilkes. He gave some fascinating insights into his culture and explained the significance of the smoking ceremony with his niece Leonie. Participants took part in the smoking ceremony, intrigued and fascinated while the smoke wafted around them. 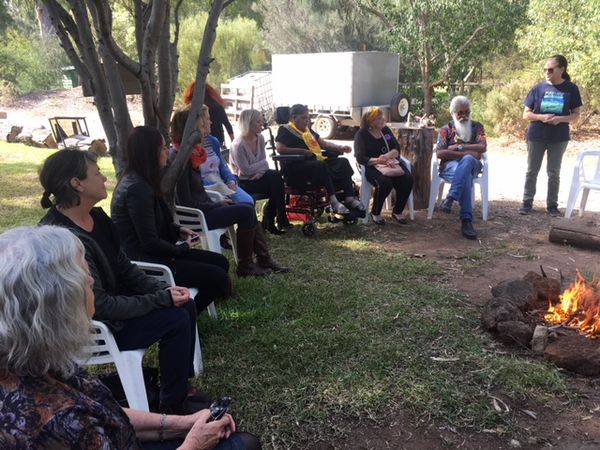 Some participants came each week, others to one or two sessions. Everyone was intrigued by the language and all I believe, enjoyed the explanations and translations. A Maori woman and her children relaxed more as each session unfolded and enjoyed it more each time. The children embraced the language and were often the first to venture the translated word. Another participant joined in at the Walyalup Kannajil/Madjitil Moorna/Koorlong event at City Farm and told me it was a wonderful event.

One week a 94 year old came and thanked everyone and said she applauded wholeheartedly what we were doing and what we were achieving. As part of the practice for The Sorry Song, while part of The Apology was read out, she broke down sobbing, so strongly did she feel about it. She had many Aboriginal friends and connections long ago in the north of the state.

The week after that, while we sewed desert hibiscus commemorative flowers to give to the Stolen Generations on Sorry Day, Uncle Alan Kickett came and told some of his history and the history of the area. Two participants sat spellbound. They stopped their sewing and listened to him, obviously fascinated by his depth of knowledge, his passion and his commitment to his culture.

The participants are looking forward to the final workshop on June 8 and were happy to do “something different” whatever that may turn out to be.